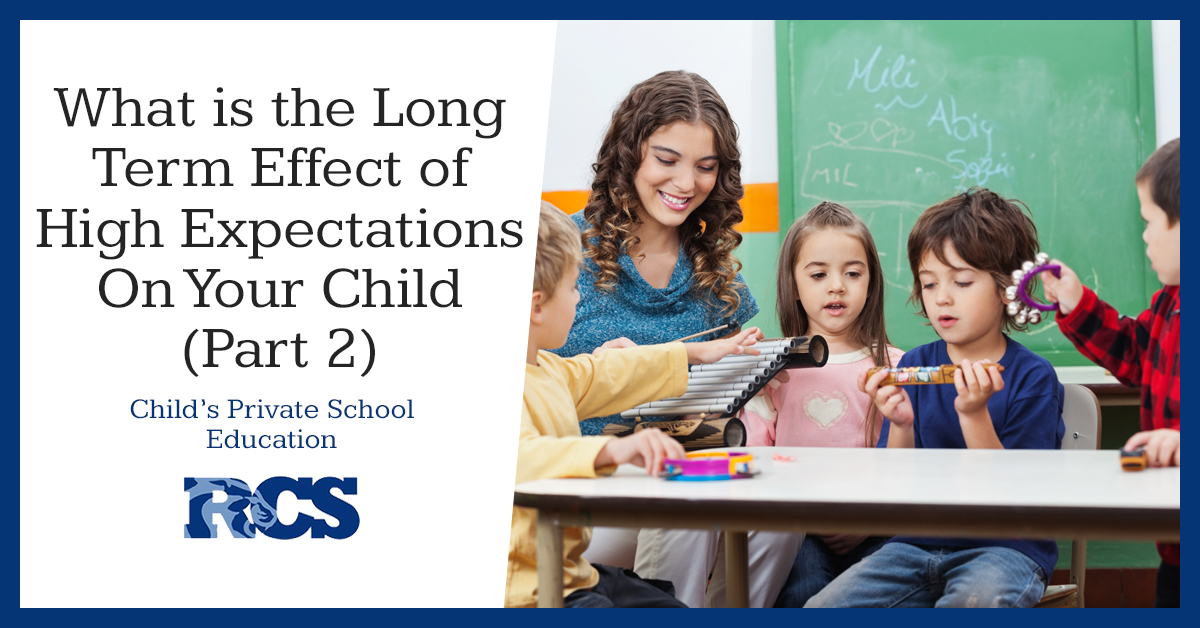 What is the Long Term Effect of High Expectations On Your Child (Part 2)?

Intrigued by the possibility that expecting more from your child might just ensure that they achieve it? So are we. As a Christian private school, we understand the importance of instilling upstanding morals while providing a classical education that will immediately springboard them to fulfilling their full potential. If you didn’t catch the first part of our critical analysis of the various encouragement based studies surfacing, catch the first portion of this article. Below, our analysis of the study’s conclusion and success continues.

After creating the Rosenthal effect theory, they turned their attention to elementary aged children. What if the same effects of expectations in a figurehead could affect a child’s success is the same way it affected the rats while learning? For this test, the researchers didn’t try to make the children run a maze, they merely gave the children IQ tests. They started with a classroom full of 18 children in elementary school whom they gave the IQ test to at the beginning of the year. The researchers then notified the teachers that they had located around 20% of the children that would “bloom” within the next year. They communicated that they expected a high level of academic achievement form those specific children. These children were, of course, chosen at random. Their various IQs ranged over the entire spectrum and were not used in choosing the “20 percent guaranteed to bloom.” The Rosenthal effect proved true once more as, at the end of the year, the bloomer children from the class were performing better and showed an increase compared to their classmates who may have started out with relatively higher IQs. In fact, the bloomer children showed increases in a second IQ test from their first test at the beginning of the year. It offered an interesting idea: was anyone’s success just a self-fulfilled prophecy? Could you expect your child to succeed and they would indeed end up better than they started off, at the very least?

If you search for recent data on this supposed conclusion, you’ll find that they exist and their findings are the same. There was a study in 2014 that found that the expectations of elementary school children were directly reflected in their grades. The old saying that “boys do better in math than girls” doesn’t ring true if you apply simple mathematical principles at a young age with little girls, but once they enter higher grade levels like 3rd and 4th, that changes because of the parent’s expectation. If IQ can be affected by a teacher’s expectations, certainly the ability to understand mathematical equations would be totally affected by a bias. A study from 2015 found that mothers who believed in the idea that girls were not as good at math as boys had daughters that performed poorly in math once they entered their middle years of elementary schooling.

As a private school that serves Fort Collins, Loveland, and the rest of Northern Colorado, studies like this are troubling and spell out the importance of encouraging parents to expect everything from their child. The more of a conscious and subconscious effort you make toward thinking that your child will be the most amazing person to ever grace the earth and has no limitations, the more the child will naturally emulate those behaviors.

Support Your Child With Private Schooling

Believing they’ll achieve everything they set their mind to and seeing them do it are two very different experiences and they’re separated not only be your expectations but ensuring that your child starts off on the right foot. Investing in a private school means introducing your child from an early age that the expectations for their success are high both consciously and subconsciously. Resurrection Christian School can instill them with both the moral compass to make the right decisions and the potential for great success. Check out our curriculum for this coming year for our elementary school, middle school, and private high school to get started on making your dreams for your child a reality.

We encourage our students in every area of education and interest they pursue. We’re not just the best private school institution in Northern Colorado, we also offer a variety of sports and arts for your child to explore their true calling. From hockey to choir, we’ll inspire and help your child shape their desires and their future. Start the enrollment process today.